Hello everyone! This is my personal review of the kindle fire 7" tablet. Overall, I would highly recommended this tablet if you need  a cheap eBook reader or if you're a prime member. However, if children will be using it, buy the children's version because you can then get 2 year warranty and a case. 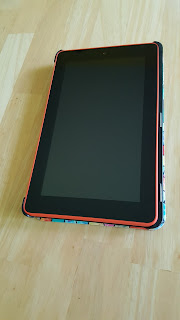 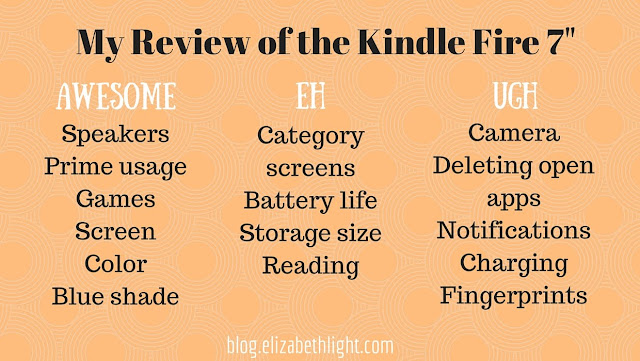 Awesome:
There are a lot of great features with the Kindle Fire 7". I know some reviewers do not like the speakers, but I really like them, mainly because they're louder than my computer speakers. I also hadn't really been using my Prime Membership to it's full potential so I've been mainly using music and the movies. They also offer a lot of great games and apps. I know there are ways to get the Google Playstore however, I'm picking apps I already don't have, so I can enjoy them on the tablet.

I think the screen size is great for me! However, if I got this for my dad or grandparent, I would definitely get a bigger size screen. I bought the tangerine color tablet and I love it! Finally, I love the option of Blue Shade because I can sometimes get headaches easily from reading screens or looking things up online. The Blue Shade helps block out blue light, which can make it harder to sleep, but it also helps if your headache/migraine is light induced from my experience. You can also customize the color and I ended up going with an orange color but it's on a scale between red and yellow.


Eh:
These four things aren't deal breakers for me but can be a bit annoying. The category screens are great because they keep books, apps, movies, etc. separated however it would be nice to customize which ones show up. Also, if the different categories would loop back to the home screen it would be better. The battery life is pretty good but I usually have to charge once a day. For my tablet, I bought the 8 GB version but it stinks that the storage takes up 2 GB. However, if you're not planning on ever downloading anything but books, then you'll have plenty of room. Finally, reading is fairly decent on this tablet, however I would pick my Paperwhite any day over the Fire tablet for reading a good book. But, I do like the how you can change the colors of what you're highlighting on the Fire tablet.

Ugh:
These things are annoyances that I have but still aren't deal breakers. The camera's are a nice token touch but, until they're better quality, it's not worth it to use them. Most phones now a days have a much better camera than this tablet. When I go to delete apps, it usually takes a moment before the x's show up. While it's not the end of the world it feels slow especially after being on a phone that is much quicker for the response. Also, a close all feature would be really nifty. The notifications are alright except I had to turn off notifications for several apps because they refused to removed. It would place in the "Eh" category if you could actually go to an application from the notification. The game notifications never take me to the app but it may not be the case with all apps.

Charging can be annoying for two reasons: the port is hard to use in the dark and unless you charge in a single outlet, with the fire charger, it can take forever to charge. I have one of those outlet plug ins where you can use 3 different chargers and 2 USB port cords. For some reason it refuses to charge my tablet well. Finally, this tablet attracts finger prints like crazy! I finally put on a screen protector (I'm not reviewing it because I need to put a new protector on and see if some issues get resolved) and that reduced the amount of finger smudges. 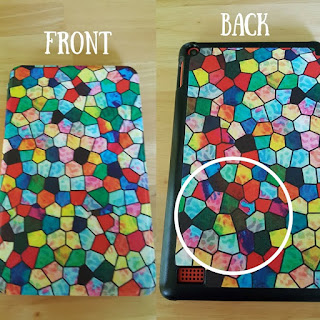 My case:
I would give my case a solid 3.5 out of 5 but, most likely, some else would score it around a 3. I personally love the colors on my case and the fact that my orange tablet actually shows through. However, the origami case is awkward to say the least. Plus my case obviously has spots where the colors ave bled (look in the circled area on the back). While it doesn't bug me I know others would be upset. Another point I don't like is the fact that there currently aren't any tablet covers that have the sleep/wake function that the Paperwhite Kindle case has.

Final words:
If you get the Kindle Fire 7", I recommend getting a screen protector ASAP because I ended up getting a small scratch on my screen. It only really shows up when the tablet is off and doesn't bug me enough to send it in. Also, beware of dead pixels. I have one since opening the tablet out of the package. But, once again, it's not enough to bug me to send it in.

Do you want to buy a Kindle Fire now? Like the case? Consider buying them from the links below so I can get commission (and buy more books)!

Posted by Elizabeth Light at 10:00 PM
Email ThisBlogThis!Share to TwitterShare to FacebookShare to Pinterest